Methods: A total of 150 patients with severed finger replantation admitted to our hospital from March 2018 to March 2019 were selected. Patients were divided into observation group and control group according to different treatment methods. The observation group received additional ozone autologous blood treatment in the control group. We compared the number of white blood cells, visual analogue scale (VAS) scores, and the expression levels of vascular endothelial growth factor (VEGF), transforming growth factor-β (TGF-β), and platelet-derived growth factor (PDGF) in the two groups of patients before and after intervention. We also assessed the hospitalization time and survival time of the replanted finger in the two groups, as well as blood flow values (Vbcf).

Conclusions: Intervention with ozone autohemotherapy after severed finger replantation can significantly increase the number of white blood cells, relieve postoperative pain, and improve the survival rate of the finger body. Ozone autohemotherapy also improves the microcirculation after anastomosis of the severed finger by up-regulating the expression of VEGF, TGF-β and PDGF in blood.

With the continuous development of industrialization, finger accidents due to production have increased year by year. Replantation is the surgical technique used to repair a severed finger. The replantation of a severed finger involves re-anatomizing the blood vessels, nerves and tendons of the finger using microsurgical techniques to restore the patient’s finger structure and function and reduce the occurrence of disability (1). Finger replantation is a process of organizational rebuilding and functional rebuilding, generally in two stages. First, the replanted finger survives, and second, finger function recovers. Although there are effective technologies and a high success rate of finger replantation, the low survival rate of the severed finger during the survival stage due to various reasons is the main reason for failure of finger replantation. The recovery process after finger replantation is often complicated by severe pain, infection, and blood flow issues, and these risks influence the recovery of the replanted finger. Therefore, improving the finger survival rate after replantation is the key to postoperative rehabilitation (2). Routine postoperative care includes analgesic treatment, as well as anti-biotics, anticoagulation, anti-spasm and other blood flow recovery treatment approaches. Despite this, replantation still has a low success rate due to pain, infection and impaired blood flow recovery. The failure of severed finger survival can result in long-term disability in patients (3).

In recent years, studies have found that ozone is effective for improving the blood oxygen saturation of local tissue cells and improving the microcirculation function of damaged tissues (4). Based on these clinical findings, ozone autologous blood therapy (autohemotherapy) has been widely used in the prognosis of stroke patients and achieved satisfactory results. However, there are few reports regarding the improvement of local microcirculatory function after finger replantation (5). This study aims to assess the impact of early intervention ozone autohemotherapy after severed finger replantation. We present the following article in accordance with the CONSORT reporting checklist (available at http://dx.doi.org/10.21037/apm-20-1467).

A total of 150 patients with a severed finger admitted to our hospital between March 2018 and March 2019 were selected. This included 97 males and 53 females aged 18–60 years, with an average age of 33.27±4.66 years. The inclusion criteria were as follows: indications for replantation surgery (completely dissected, neat, intact finger body, no serious contusion); injury to operation time <12 hours; no systemic diseases or other factors affecting finger healing. Replantation surgery patients provided informed consent and accepted the conditions of this project, and replantation surgery was performed by the same group of surgeons. The exclusion criteria were as follows: glucose-6-phosphate dehydrogenase deficiency, toxic hyperthyroidism-Basedow Graves syndrome, thrombocytopenia below 50,000 and severe coagulopathy, acute myocardial infarction, massive and acute bleeding, epilepsy patients, hemochromatosis disease, patients receiving copper or iron treatment, psychosis, drug dependence, trioxygen allergy and citric acid allergy. The project’s research and treatment plan was submitted to the Ethics Committee of Cixi Third People’s Hospital for approval and implementation (No. 2019-LP-03). All procedures performed in this study involving human participants were in accordance with the Declaration of Helsinki (as revised in 2013). According to different treatment methods, patients were divided into an observation group or a control group, with 75 patients in each group. The difference in baseline data between the two groups was not statistically significant (P>0.05, Table 1), indicating they were comparable.

For the control group, treatment was as follows: Intravenous infusion of antibiotics for 3 days; intramuscular injection of papaverine 30 mg 3 times a day; intramuscular injection of anisodamine 5 mg once a day; intravenous infusion of low molecular dextran 500 mL once a day for 7 consecutive days; replanted fingers are irradiated with electromagnetic wave physiotherapy to keep warm and the patient was kept in bed for 7 days. For the observation group, treatment was the same as the treatment of the control group, with the addition of simultaneous ozone autohemotherapy. A medical ozone generator (Carter, Germany) was used. Venous blood was collected from the patient’s upper limb (100 mL) in a closed sterile system, and 2.5% citric acid was added to sodium anticoagulant (20 mL). After being thoroughly mixed with 100 mL of ozone with a concentration of 30 µg/mL, this was intravenously infused within 20 minutes and the patient was treated once every 24 hours for 7 consecutive days.

To detect replanted finger blood flow, a laser Doppler image diagnosis system was used, generating finger blood flow values (Vbcf). If the replanted finger has a good blood flow recovery condition, the finger body is ruddy, the finger temperature detection is close to or lower than 1–2 °C, the fingertip tension is the same as or slightly higher than the healthy side finger, and the capillary filling test is good, and If no infection is found in the severed finger, the replanted severed finger can be considered alive and the time recorded (6).

To detect the expression levels of vascular endothelial growth factor (VEGF), transforming growth factor-β (TGF-β) and platelet-derived growth factor (PDGF) in blood, before and after treatment and after the intervention, 5ml of blood was drawn from the upper limb veins of each patient into an EDTA-Na anticoagulation tube. This was followed by centrifugation at 1,000 g for 10 minutes. The supernatant was collected and divided into 200 µL/tube, labelled, and stored at −80 °C.

A double sandwich method ELISA assay was used to detect the expression levels of VEGF, TGF-β and PDGF. (I) Thaw and thaw samples, restore the reagent to room temperature, and determine the number of samples. (II) Set up blank wells, standard wells, and sample wells. Accurately add 50 µL of the standard on the enzyme-coated plate. Add 40 µL of sample diluent to the well of the sample to be tested, and then add 10 µL of the sample to be tested. (III) Incubation: seal the plate with a sealing film and incubate at 37 °C for 30 minutes. (IV) Mixing solution. (V) Add enzyme. (VI) Incubation. (VII) Washing. (VIII) Color development. (IX) Termination. (X) Determination.

). Using t tests and repeated measures analysis of variance to test. Bonferroni is used for post-mortem inspection. P<0.05 indicated that the difference was statistically significant.

Table 2 Comparison of the number of white blood cells at different times after replantation surgery between the two groups (x¯±s
, ×109)
Full table

Blood flow after finger replantation is greater after ozone autohemotherapy

The average hospitalization and finger survival times in the observation group were shorter than the control group, and the difference was statistically significant (P<0.05, Table 5). 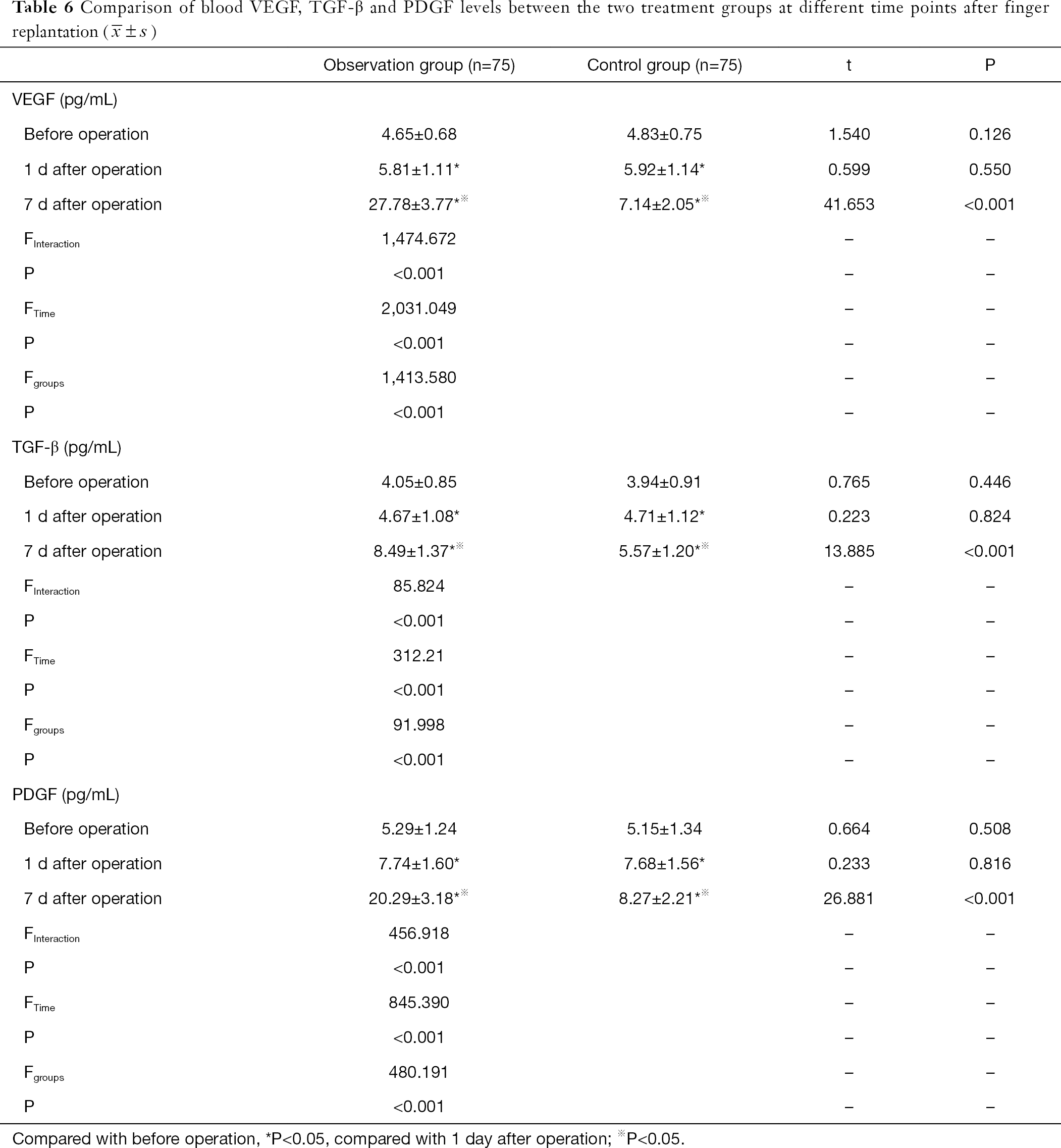 At present, there are some controversies surrounding the mechanisms underlying ozone therapy. Some researchers (8) believe that ozone predominantly activates the extracellular regulatory protein kinase P38, which in turn activates the Nrf2/EpRE pathway, and ultimately promotes superoxide dismutase and catalase to exert an antioxidant effect. Other researchers have suggested that ozone therapy stimulates the body’s non-specific immune response, promoting white blood cell phagocytosis, thus regulating the body’s immune environment and enhancing immunity (9). In addition, previous studies have suggested that ozone can activate red blood cell metabolism, improve the oxygen saturation of hemoglobin, and enhance the use of oxygen and ATP by tissues (10). Although the underlying mechanisms of ozone treatment are not yet clear, it is nonetheless effective across a broad spectrum of diseases. A large number of studies have found that ozone has a significant therapeutic effect on wound healing of diabetic feet, atherosclerosis, lumbar intervertebral disc herniation, chronic hepatitis and other diseases (11,12).

It has been previously shown that ozone plays a role in three aspects of treatment, namely analgesia, anti-infection and vascular repair, of which vascular repair is the most important role (13). Rivas et al. (14) confirmed using immunohistochemistry that injection of ozone into the joint cavity increased the expression of HIF-1α in synovial tissue, initiating the transcription and expression of VEGF, thereby promoting vascular proliferation and the formation of pannus. Villwock et al. and other (15) groups have confirmed that TGF-β1 has a chemotactic effect on endothelial cells, which induces angiogenesis and promotes wound healing. PDGF has a chemotactic effect on neutrophils, monocytes, and fibroblasts, allowing these cells to migrate to wounded tissues. PDGF is also a mitogen for fibroblasts, inducing the regeneration of fibroblasts and increasing the granulation tissue. PDGF can also activate macrophages in the body to synthesize VDGF, which further promotes angiogenesis. The chemotaxis, activation and induction of PDGF in different cells are beneficial to tissue repair at the wound site and accelerating wound healing. Wang et al. treated diabetic foot using ozone therapy and found that the expression levels of VEGF, TGF-β and PDGF in wound secretions significantly increased. Consistent with this, our study showed that serum VEGF, TGF-β, and PDGF levels in the observation group were higher than those in the control group 7 days post-surgery. Therefore, ozone can achieve blood vessel repair by up-regulating the expression of VEGF, TGF-β and PDGF in the blood.

Due to the limitations of the experimental conditions in this study, the patients were not randomized. Therefore, the experimental results may still have certain deviations. Secondly, our current study failed to focus on the specific mechanisms of ozone therapy affecting VEGF, TGF-β and PDGF. This will become the direction of our follow-up research. We also expect other scholars to provide new insights from different perspectives.